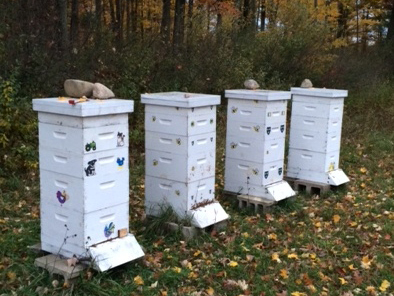 Complete hives with 2 deeps and 2 supers

The farm's beehives started producing honey in the summer of 2014. Most people enjoy the taste of honey but few of us understand what goes into keeping bees or why bees are so important. Wild and domestic bees are needed to pollinate approximately 75% of all the fruits, nuts, and vegetables we eat. (Domestic bees account for 30% of that pollination.) All of those fruits nuts, and vegetables would no longer be available to us without bees. That is why many farmers keep bees: they help keep our farms healthy. They are also neat little creatures that are fascinating to be around. All the great honey we get as a result of keeping bees is just a fringe benefit. A sweet fringe benefit we can share with you.

Honey has been eaten for thousands of years and has been found in ancient Egyptian tombs. Honey was highly valued in the middle ages and was used by European peasants to pay their feudal lords. The ancient Greeks used honey as medicine. It is interesting to note that the honey found in the tombs was still safe to eat. Honey does not spoil.

Even though honey is sweet, it is good for your health. It contains flavonoids and antioxidants, has anti-bacterial and anti-fungal properties, reduces throat irritation and cough, is a natural probiotic, and can help in the healing of wounds and minor burns when applied topically. Even with all these health benefits, honey should not be given to children under one year of age as their digestive systems are not developed enough to safely eat honey.

Keeping bees involves providing them with a hive to live in. Each hive contains over 10,000 bees. Bees store their honey in the hive and the queen bee lays her eggs there, too. A constant supply of new bees is needed because a bee's life expectancy is only about three weeks. Not a lot of time to make your mark is it?

Bee hives are made up of "deeps" and "supers". Deeps are the base units of the hive that are used for storing honey and brood. Each super and deep contains about 10 frames. The bees build comb on the frames. The comb is used by the bees to store pollen and honey, and to raise brood (baby bees). Bees enter the hive through an opening at the front of the first deep. In the early spring and late fall, a feeder is placed on the top of the hive so that sugar water and in some cases bee cake can be placed in the hive to supplement the bees food sources and help them survive the cold weather. 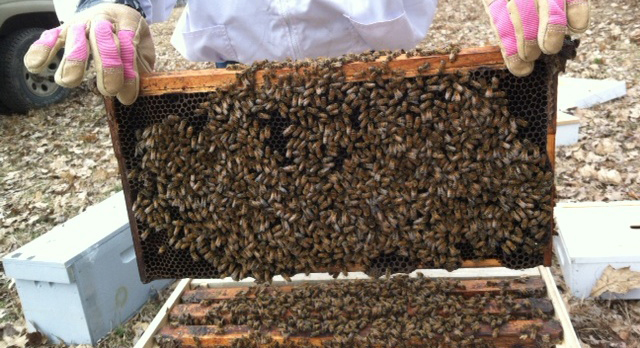 Most beehives have two deeps. The deeps are where the queen lays eggs and the worker bees take care of the brood. The bees will also store honey and pollen in the deeps. "Brood" refers to the stages of the larvae development after the queen lays her eggs in the brood cells. 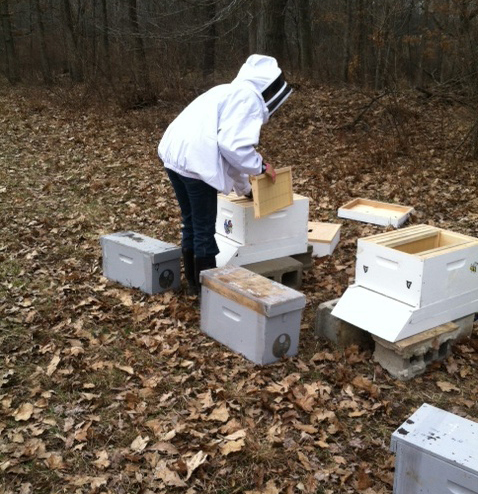 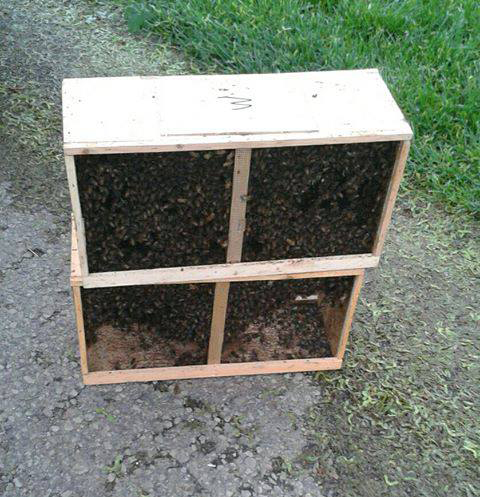 Two boxes of bees ready to be placed in hives

Bee keeping starts out by placing bees from a box or nuc into a single deep. A nuc is a mini hive in which the bees have already been building comb on the 5 frames in the nuc. Hopefully the queen has also laid some eggs in the comb. Box bees are just that, bees in a box with a queen. These bees are transferred into a hive so they can begin building comb and the queen can begin laying eggs. No matter which method is used to start a hive, the goal is to have the bees start building comb and the queen to start laying eggs in her new home so that more and more bees are added to the hive. The beekeeper will add a second deep once the first one becomes almost full of brood and honey so the hive can continue to expand. The comb is "capped" by the bees after it is filled with either brood or honey. The cap is a light wax-like substance that holds the eggs or honey in the individual chambers of the comb. 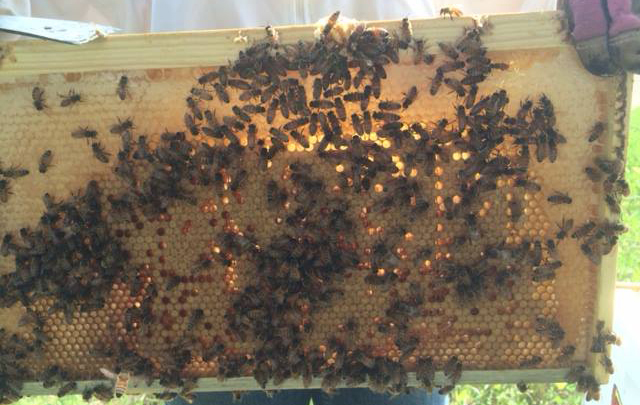 Deep frame after bees have begun storing honey and the queen has laid eggs. Honey is in upper left corner and brood is in the center

Working with bees is not without risks since they have the ability to sting you. If you have ever been stung by a bee you know it can be very painful. Multiply that by 20 or 30 and you know why beekeepers take precautions. The most obvious is the white bee jacket you see in the photos. This has a hood with a screen that protects the keepers' face while still allowing for air flow and good vision. The beekeeper will also use a smoker to pump smoke into the hive which has a calming effect on the bees reducing their distress and the chance of the beekeeper being stung. Bees die after stinging so that is another reason we try to avoid having them sting. 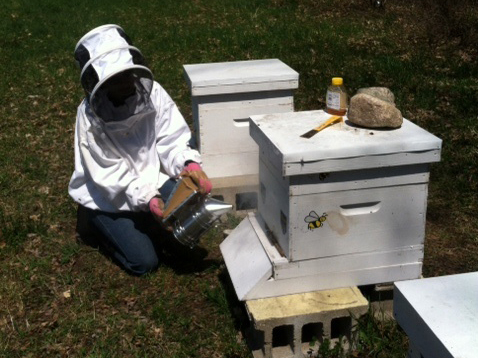 Supers are the top boxes of the hive that are used for only for storing honey. Once the bees have the second deep about 75% filled the bee keeper will add the first super. Additional supers are added as the one below becomes full of honey. A strong hive will have two to three supers. Honey is harvested from the frames in the top super. Honey harvest is limited so that the bees have enough left in the hive to make it through the Michigan winter. That is after all the reason bees make and store honey: so they can survive the winter when no other food is available. 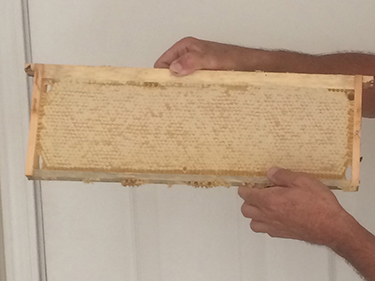 Honey is first harvested in mid-summer by removing frames full of honey from the supers and replacing them with empty frames. The bees will fill the empty frames with comb and honey again. The frames of honey are taken to the honey house where the "cap" the bees have put on it is cut way. The frames are put into an extractor which uses centrifugal force to spin the honey out of the honeycomb. The honey is then collected, filtered, and placed in jars. Extractors can be small, hand-operated machines (see photo) that can spin 2 to 8 frames at a time or larger, electric- or gas-powered machines that can do many frames at one time. 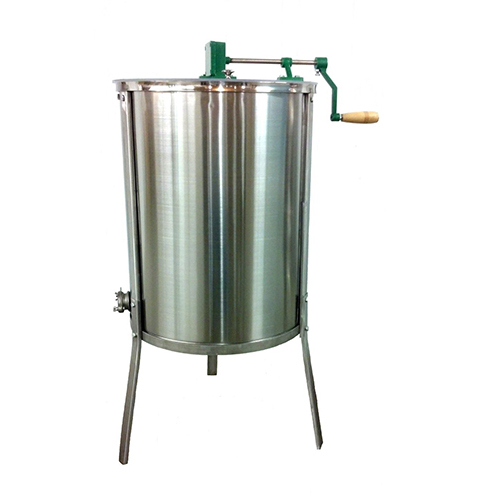 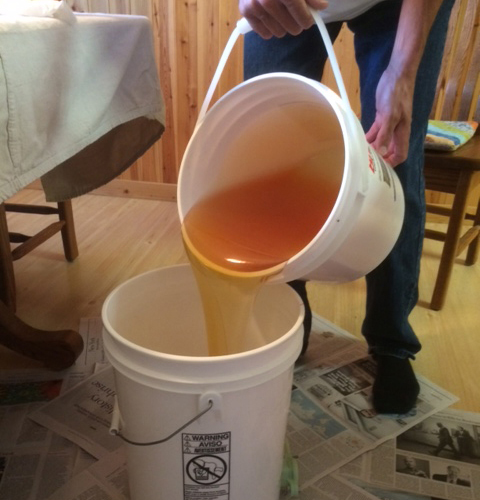 Honey can be harvested again in the early fall as long as there are lots of blooming plants through the late summer and early fall. Honey harvested in the summer tends to be lighter in color. Honey harvested in the early fall tends to be darker. The important thing is to leave enough honey in the hives for the bees during the winter. Honey is what the bees survive on during the winter as they can't leave their hives due to the frigid temperatures. 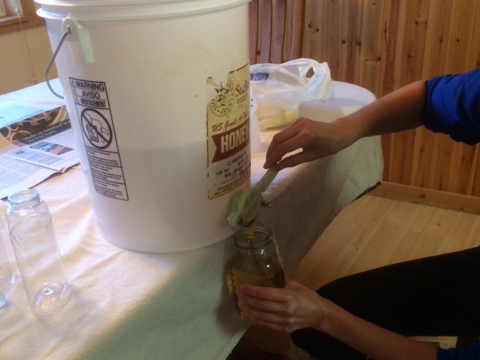 Pure honey being bottled for sale 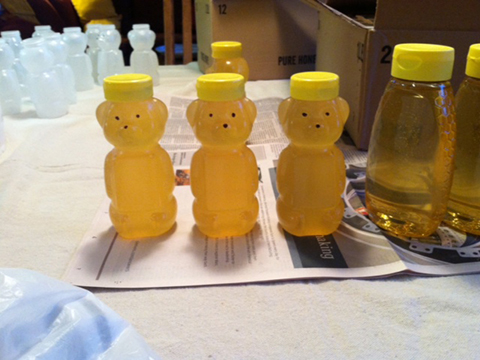 We sell "raw" honey. That means we don't do anything to it. We simply strain it to remove any foreign objects like grass or bits of comb and then we bottle it. Honey is a wonderful natural product and we don't think we can improve on nature. You're sure to use it up fast. It makes a great sweetener for your tea, it is great to bake with, and is delicious on toast or over freshly-baked bread. There are hundreds of uses for honey including home remedies. We recommend that you get two jars instead of one because you're bound to need them. We sell our honey at our corn maze during the fall or you can contact us at fourgreenfieldsman@yahoo.com or by phone at 231-580-1463 in mid to late July and we'll let you know if we have honey and how you can purchase it.